Posted on August 1, 2010 by The Lazy Photographer 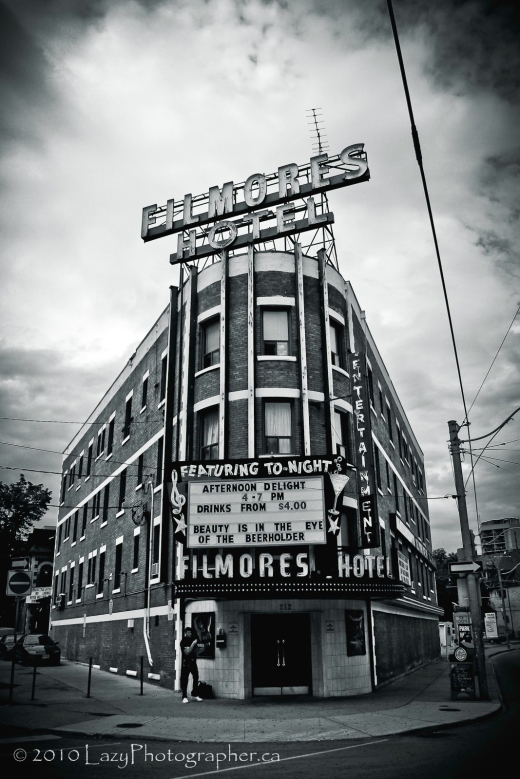 If you’re ever visiting Toronto and looking for a place to stay, you might want to check out Filmores Hotel. Located just east of downtown Toronto in one of the more seedy parts of the city, the main floor is home to an iconic strip club, for all your entertainment needs. I don’t know how much rooms cost, but I’m sure they’re cheap. 😉

I’ve been interested in photographing this hotel for a while now. I had to run out into the middle of the road to get a shot free of overhead wires. I kept going back and forth as traffic would permit. On one of my trips back to the sidewalk on the opposite side of the street, a young woman — obviously with a “dancer” background — approached me and started talking like we were old friends. She was all interested in why I was snapping the hotel and such. She works at the local diner up the block, which was surprising to me since, based on her interest and her body, I assumed she worked at Filmores. We chatted a bit and headed our separate ways. That neighbourhood is chockablock with crackheads, homeless shelters and hookers, so you never quite know who you’re talking to or why they’re interested in you. In her case she was just being overly friendly, something very rare in the cold city of Toronto. As for the photo, I knew upon taking it that I wanted to dial it up in post processing. Not sure if I went too far, though. Hope you like it.