Posted on September 1, 2012 by The Lazy Photographer 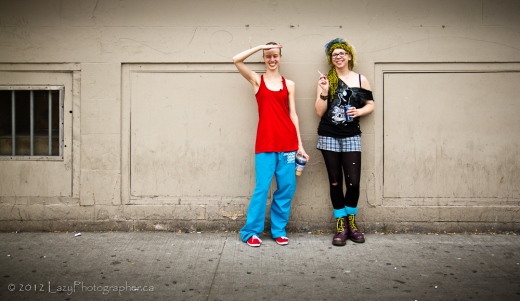 I took this photo back in late May during an outing with the photo walks group. This was on Spadina Ave. They were having a smoke break and our group was getting ready for the official group photo, which I was tasked with taking. As my groupo gathered, I jogged back to these two girls and asked if I could take their picture. They said yes and I quickly snapped off a couple of shots before running back to take the group photo. I take the group photo because I can’t stand photos of myself so, since I won’t be in any group photos, it only makes sense I take them. I really like the natural, sunny nature of these girls. They were great to photograph. I was sort of joking around with them first to get them in the right spirit for the photo. I hope you like it.

So I spent the day downtown with my ex-girlfriend. We had a terrific time. I didn’t even bother taking my camera. It’s nice that after all our time together we managed to salvage a friendship. She’s a great person and I’m lucky to have her in my life. And now that we’re not “together” it’s so much less complicated. Oh, I dropped by the restaurant this morning and the head waitress informed me that there was lots of buzz around my photographs, with people walking around the whole restaurant looking at them. That’s encouraging news. Seems the photos are well received.