Posted on September 27, 2012 by The Lazy Photographer 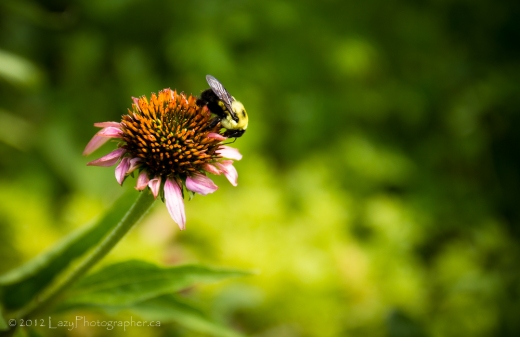 Well I suppose it’s safe to bid the summer of 2012 adieu. For me, it was too hot to really enjoy, but I did have some good times. Truth be told, I’m only mentioning summer as an excuse to show you this photo. 🙂

To full frame or not to full frame, that is the question. During my busy week off one of my chores was to get the sensor on my camera cleaned. I took it to Downtown Camera on Queen St near Church St. They managed to eliminate all the existing dust spots, but when I checked it myself at home I notice there is one new one where one never existed before. Great. I suppose one spot is better than the dozen that were there before. If I was the guy cleaning the sensor, there’s no way I could live with that spot, though. Anyway, while I was there I took a look at the new Canon 5D III full frame camera. I also asked the guy for a written quote, since I wanted the camera with the 24-105 kit lens, a battery grip and extra battery, a couple of cards and a UV filter. We’re talking like thousands of bucks in gear here. The guy said, “Well, it’s best you just wait until you come in to buy it and we can work up a quote then.” Huh!? So I walked over to Henry’s where a nice salesman named John showed me a 5D III and, without my asking, offered to run up a written quote for me. When I got home I called Aden camera and spoke to Mike, the sales guy from whom I purchased my T2i, and he took my list over the phone and called me back a half hour later with an amazing price, like $500 less than anywhere else. Then the next day (yesterday) he called again and said his manager to him to call me and knock another $100 off! The big question is, should I pull the trigger on this badboy? I remember when I bought my T2i from Aden. A full year after buying it, the camera was still selling for $100 more than the price I got it for. In other words, they are very competitive in their pricing. I don’t actually have the cash for such extravagances, but I could throw it on my line of credit. The responsible adult in me is saying, no you can’t afford it, don’t do it. The kid in me is saying, EARLY CHRISTMAS PREZZY SOUNDS LIKE A GREAT IDEA! 🙂