Posted on December 5, 2013 by The Lazy Photographer 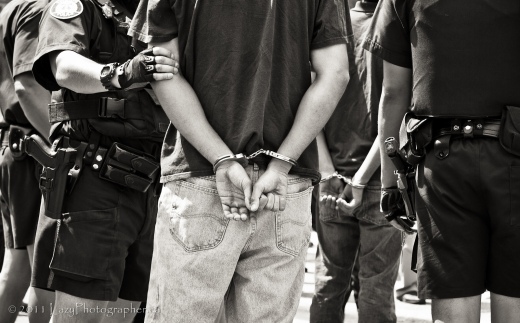 This dates back to the summer of 2011 during the India Independence Day celebrations at Dundas Square. A big fight broke out in front of the Eaton Centre. The cops were on it in no time and I just ran right into it with them shooting away. I love that sort of thing. Shame some arseholes decided to rain on their parade. I might have posted this shot already with a bunch in a slide show, I don’t recall. Anyway, tomorrow’s Friday and the end of one long week. Gotta say, it went bloody smoothly. On another positive note, my shoulder is finally better enough for me to get back to my old workout routine, except now I’ve added in the cardio that I’d been doing with my modified routine while my shoulder was injured and healing. This is my first week getting back into it. My new routine takes longer but kicks the crap out of my like crazy. The first couple of times I thought I was going to be sick about half way through, but that’s since passed. And I’m not even back to my heavier weights yet. I’m really looking forward to rebuilding what was lost in the six weeks I was injured. Thank god it wasn’t a tear in my rotator cuff. It’s going to be a long and lonely winter but at least I’ll have this to focus on. Cheers.