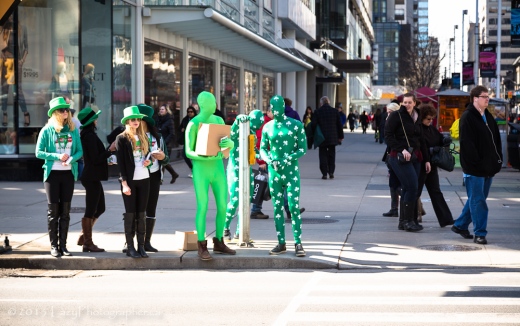 Okay, not the sort of little green men you were expecting, right? I shot this a couple of years ago at St. Patty’s Day Sunday Parade. To be honest, I’ve never considered this shot anything but a snapshot, which is why I never posted it. But it is rather odd and sorta funny, so here I am posting it now.

Speaking of little green men, I’ve always wondered about life on other worlds and UFOs and all that stuff. I love those kinds of movies, like “Close Encounters of the Third Kind” or “Invasion of the Body Snatchers.” There’s a terrific book called Communion by Whitley Strieber about alien abduction and lost time. It’s supposed to be a true story but I doubt it. Still a terrific read. Then there’s The Mothman Prophesies. Another fantastic book. Anyway, when I was young I used to fantasize about seeing a UFO in the night sky. Never happened. But maybe one day, right.