I better write my name on my cup

Posted on February 21, 2016 by The Lazy Photographer 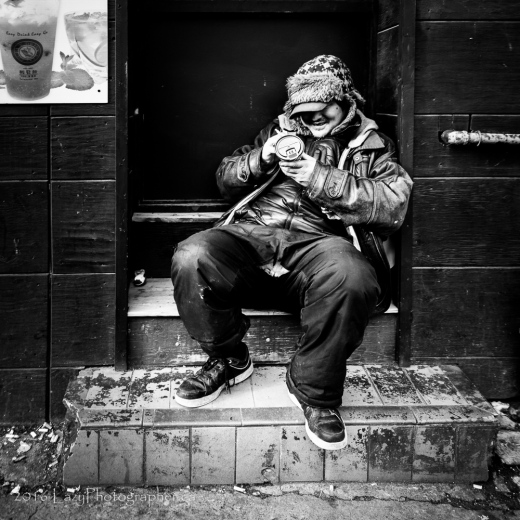 When I saw this guy I knew right away there was a shot there. My fear was he’d notice my camera and react to it. But since he seemed enthralled with writing something on that Timmy’s coffee cup I figured there was a pretty good chance he wouldn’t even notice me. But I also had people right behind me walking and I didn’t want to stop to shoot, since they’d immediately be forced to walk around me, thereby blocking my shot. So, without even looking at him, I just turned my camera sideway at waist level and fired off a couple of shots as I walked by. Maybe four of them. This one was the best of the lot. I attribute its success to the image stabilized lens, which is very forgiving to my style of hip shooting. And that’s partly why I like that new Olympus Pen F over the Fuji X Pro 1.

The Olympus has an outstanding 5 axis in-body image stabilization feature, which means that any lens you put on it is automatically stabilized. With that Fuji, to get the stabilization you have to buy a lens that has it built in, and most of their best glass doesn’t have it. To overcome this drawback I’d have to shoot with a higher ISO in order to push my shutter speed up to something over 1/250th of a second.

I shot this at 1/80th of a second, f8 and ISO 400. For hip shots I need the depth of field I get from f8, to compensate if I miss the subject and focus instead on the wall behind him (keep in mind I’m shooting totally blind). I figure the image stabilization in my lens let me gain perhaps a two to three stop advantage, meaning that 1/80th is actually like shooting at 1/320th (two stops faster). Without the image stabilization I would have to up my ISO to 1600 to get a 1/320th shutter, which makes for softer, more noisy photos.

Speaking of ISO, I always leave mine on auto, but with a range of 100-400 on sunny days and 200-800 on darker, more cloudy days. Lucky I did, since the camera compensated for this darker area by upping my ISO to 400 in order to achieve proper exposure. Had I simply left my camera at ISO 100, the camera would have compensated for the darker area by dropping the shutter speed two stops to 1/20th of a second and the results would have certainly been a blurry shot that I would have had to discard.

And that’s why for street photography it’s always good to have some form of image stabilization, either built into the camera body or into the lens. I was shooting with an image stabilized 24-105mm f4 Canon L glass lens.

4 Responses to I better write my name on my cup