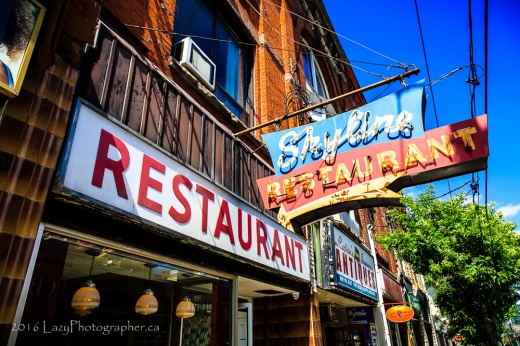 I shot this one yesterday during an epic 13.65 km (over 8 mile) walk through Toronto’s west end. I’ve been going on long walks lately, almost every weekend, in fact. Mostly to help clear my head and often without a camera. Sunday I had my camera with me. This restaurant is on Queen Street West near Landsdown. Funny thing, people know me as an east end boy, growing up in an area known as Toronto’s Beaches. But actually, we moved to The Beaches from the west end right around when I was nine coming on ten years old. For the first nine years of my life we lived on O’Hara Ave, which is a couple of blocks east of The Skyline Restaurant. I recall my Mom and Dad taking me there for dinner from time to time. And back then it had the same sign. I wish I could say it brought back fond memories, but the truth is my life was absolutely miserable before we moved to the east end. I was bullied to no end and had no friends back in the day. I still have vivid memories of that, actually. Anyway, I do love old signs and I’m glad it’s still there to this day.