Posted on July 2, 2016 by The Lazy Photographer 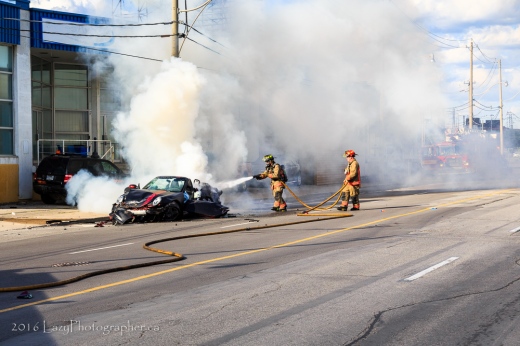 Sadly, while out shooting with a buddy of mine today we happened to be just around the corner of a very serious car crash. It seems the guy was racing down the road at a very high rate of speed and lost control. We heard the squeal of tires skidding and then a huge crash. We rushed over to the scene and by then people had removed the two victims from the car and were trying to comfort them until emergency vehicles arrived. I took a bunch of photos but I’m only going to share a couple. The driver and his girlfriend (female friend) were very seriously injured, especially her, it seems. Pray for their recovery.

Correction: One of the driver’s friends has informed me by email the girl is not the guy’s girlfriend, but just a female friend. He asked that I clear that up in my post here.

Update: VERY sad news about the female passenger. Apparently she is in a coma in critical condition. I’m hoping we can all say a prayer for her. It must be horrible for her family and friends.

Another Update: I’m afraid the lady who was a victim of this crash has passed away. I’m going to copy/paste the email I received from her friend. Such a totally unnecessary and avoidable tragedy.

Just an update…I saw this posting – and my friend has passed away. She was the female victim in the car and succumbed to her injuries yesterday, July 12th (was taken off life support).

This gentleman took someone’s life into his own hands…and walked out of the hospital 2 days later and continues to live his life. My friend who was a wonderful, free spirit, bright light and good friend to so many has been taken away due to this man and his ego and carelessness.So reckless and preventable.

Please don’t hide this man’s face. He should be aware of what he did and the damage and pain he’s caused. So should others.