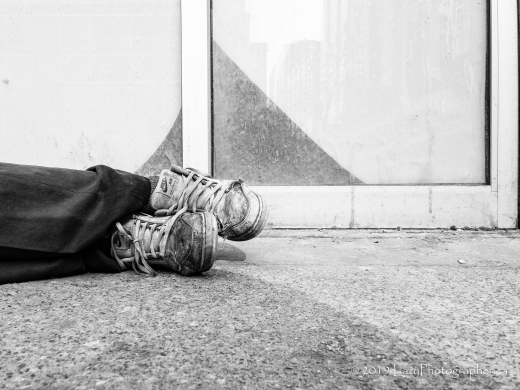 When I approached this homeless guy he was sound asleep outside a derelict storefront. At first I thought to shoot the whole scene, which would offer up more of a story. Instead, I shot only his shoes and lower legs, which tells no story at all.

What it does do is offer up a healthy dose of ambiguity. When it comes to single shots I think it’s a bit of a waste of time to worry about trying to tell a story. Storytelling in photography works best when you present a photo essay (3 to 15 photos) that leads the viewer down a path and in the ends suggests the story the photography wants to tell. A single photograph just won’t cut it when it comes to storytelling; at least most of the time. Obviously there are examples when it can strongly suggest a story, but mostly street photography tends to be random, candid moments that really don’t tell much by way of story.

The best street photography, in my view, is usually ripe with ambiguity. The ambiguity in an image invites the viewer to ponder what’s going on and in the end come up with his/her own story in an attempt to resolve the ambiguity. Of course it has to be a pretty compelling image before the viewer will feel inclined to think about what he/she is looking at. An image that’s ambiguous yet relatively boring will only make the viewer ask, “What’s going on here, why am I even looking at this,” before moving on to another image. No one wants that, right?

Had I shot the entire scene with the homeless guy sleeping outside the storefront, the resulting image would have left nothing to the imagination. You’d understand what’s going on immediately, feel a little empathy and perhaps sadness for the guy’s situation, and be done. With only his feet showing in the image, it makes you wonder about the rest of the scene. There’s content but no context. Any sense of story lies in the context, not the content.

Anyway, hope you enjoy this photograph. My move is finally complete and the old house closes tomorrow, so hopefully I’ll have more time for photography now.