Posted on September 5, 2017 by The Lazy Photographer 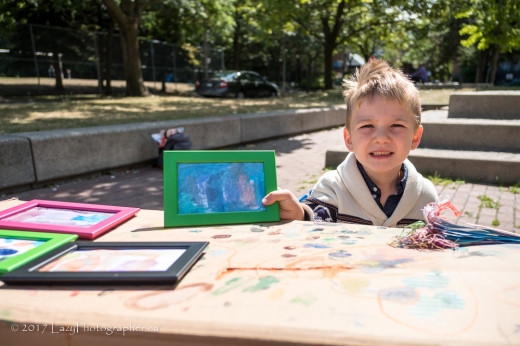 So I bought a watercolour abstract painting from a young artist on the weekend. His name is Ferguson and he’s all of six years old.

Ferguson likes legos and creating original artwork. He also enjoys meeting the people throughout his neighbourhood. His favourite place in Toronto is the Ontario Science Centre, which I remember fondly from when I was his age.

Rather than a lemonade stand, he explained, he wanted to make and sell original artwork. Very smart and creative idea, if you ask me.

Mom was there in the background but it was Ferguson handling the sales and explaining his work.

When he noticed I was having a hard time choosing which painting to buy, he even recommended one for me, which is now brightening up my office at home. This is my most meaningful photo of the day.

If I had a child who showed even the slightest interest in art or writing, I’d be right out there doing the same for him/her. What a terrific and clever mom Ferguson has. You can bet the reaction he got from today’s outing will encourage him to keep creating.

It was such a nice surprise to come across Ferguson selling his art on the street like that. I wish him all the best in his endeavours and have no doubt he’ll grow up to be a wonderful and widely known artist. Maybe one day I’ll see his work at some gallery exhibition.