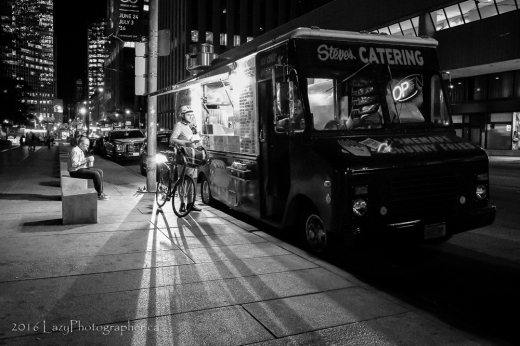 Here’s an odd thing, though. I shot this at f4 and 1/60th of a second, which is pretty much the same settings I’d use with my Canon 5D Mrk III.

I know from experience that the Canon would have selected an ISO of around 1/2000th to perhaps 1/4000 of a second, in auto ISO mode. At night I usually walk around with the ISO on auto with a range of 100-6400 on the Canon. Never more than 6400 because it’s just not necessary.

At first I was positively overwhelmed by how clean and detailed the shot was, especially considering I’d shot it in jpeg using one of the Fuji b/w film simulations.

But after thinking about it, it looks more like the Fuji ISO values are vastly different from the Canon. I’m not suggesting Fuji is fudging their ISO values, since I’ve read that ISO values can be different from camera system to camera system. Even if this had been at ISO 3200, it would still be an amazingly detailed and clean image from a jpeg shot with a mirrorless camera. If the X Pro 2 could actually produce clean, detailed and sharp images at a true ISO 12800, I’d be buying one tomorrow.

Oh, and I should mention about the auto focus speed of the X Pro 2. When I had it out in May with the 23mm f1.4 lens I said then that it was not bad but not nearly as good as my Canon. Well, yesterday morning before I went out I watched a video that walked the viewer through all of the menu setting on the X Pro 2. Under power management, there’s a High Performance setting that’s supposed to boost the auto focus speed. The downside is it burns through the battery faster. Anyway, I gave it a try and it did increase the auto focus speed, to the point where it was pretty much not even noticeably slower than my Canon 5D Mrk III, and that’s saying something for sure. If I did buy one, I’d also get a couple of spare batteries so battery life would never be a problem. If you plan to buy an X Pro 2, play around with that High Performance setting. You might be pleasantly surprised.

Now that I’ve returned the X Pro 2 for good, I’ve decided to wait until Photokina (a huge photography show in September where all the manufacturers announce their latest and greatest cameras and lenses) to see what’s on the horizon. Rumour has it that both Canon and Nikon will announce serious prosumer mirrorless cameras. That might be interesting, if they can get the auto focus system to behave fast enough.

2 Responses to Food truck at night