Posted on December 7, 2015 by The Lazy Photographer 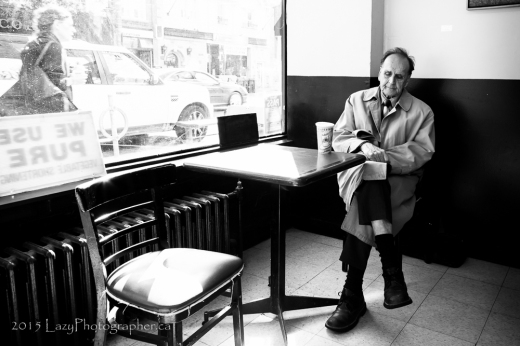 You wouldn’t describe it as classy or trendy, this little bakery in Leslieville. The plain vanilla walls were artless. The baseboards squat and flat, painted brown. No music filled the air. The look of the place was thoughtless, cold and rather utilitarian. A large clock with a round white face and thick black hands hung on the wall. But it was a busy spot; clearly a neighbourhood favourite.

Why I came in, I don’t know. Just curious, I suppose. Outside, the Thanksgiving weekend traffic lurched and crawled. Couples in fall coats weaved and dodged down the sidewalk while others meandered from one storefront window to the next. A typical Sunday downtown.

At the counter a small line of people paid for bread and purchased pumpkin pies. Some schoolgirls at one tabled laughed it up over something on a smartphone screen. No one took notice of me or my camera.

I eyed the ancient display case, it’s glass smudged with fingerprints. One corner sported a long crack in the glass. A row of perfect pumpkin pies stood at attention like puppies at an animal shelter. I resisted and headed to the door.

In the corner by the window an old man in a suit and coat sat alone, eyes closed, oblivious to the cacophony of sounds echoing throughout the bakery. On the table before him, a lone coffee cup. I couldn’t tell if he was sleeping or simply resting his eyes. An unscheduled late afternoon nap might be in play. Sometimes they’re the best kind.

I stopped at the door and watched him for a moment. No one seemed to notice him, or me watching. I wondered about him, his life. What brought him to this moment, alone on Thanksgiving. “Mind if I sit here for a bit,” I imagined me asking. “How’s your day going,” perhaps I would enquire. Maybe we’d engage in conversation a bit, like human beings are supposed to do. He’d tell me about his family or how things used to be for him before he retired. He’d ask about my camera and my photography. “Well it was a pleasure talking to you today,” I’d finished, before leaving. He’d nod and smile, fully awake now. I’d leave and take with me the memory of this moment. I’d wave through the window once and he’d smile back.

Later that evening when his son phoned from out west to wish him a happy Thanksgiving, he’d mention meeting me. I would be a memory for him to share. It wouldn’t be much but it would have been better than nothing, I suppose.

I took his picture. And then I left him there, alone, asleep, with no story to tell.

4 Responses to Alone on Thanksgiving