How to talk to strangers

Posted on October 30, 2018 by The Lazy Photographer 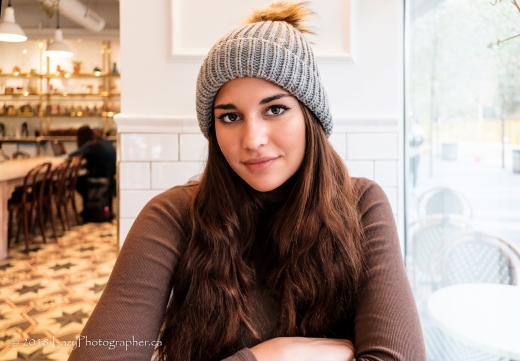 Sunday I met my buddy Geoff at Ryerson Balzac’s before we headed off to Pedestrian Sunday at Kensingon Market, the last one of the season. I had a plan to force myself to talk to more strangers than I usually do and convince them to allow me to photograph them. It’s different when you make this a challenge instead of just doing it when the opportunity arises.

The plan was to approach the unapproachable. People who looked like they’d say no, for whatever reason: too beautiful; tough and moody; street people; whomever might seem like they’d have no interest in some stranger making photographs of them.

So I started at Balzac’s by approaching one of the most beautiful women I’ve seen in a long time. Typically I’d be far too shy and afraid of rejection to make the effort with someone like this woman, but now that I’d created this challenge for myself I figured she’d be a great person to start with.

“Excuse me,” I said. “I’m a photographer and I noticed you there and have an idea for a photograph with you.” She seemed agreeable, so I continued. “I need you to put on your toque again (she’d removed it when it entered the cafe) and sip your coffee so that all that’s exposed is your eyes. You’ll look straight on at the camera.” She was totally down with that.

So after I got my staged shot, which I’ll post at a later date, we chatted a bit and I took a couple of other photos, which you can see above. I said something and she laughed and I fired off a shot from the hip to catch her in an unguarded, candid moment. You can see the results in the second photo here.

I think getting comfortable shooting strangers is one of the toughest hurdles to overcome with street/documentary photography. Many people simply avoid it, and you can usually tell by the quality of their photographs. Often the subjects are captured at a comfortable distance, which usually makes for a less engaging photograph. I can usually tell by a person’s photographs if he or she is afraid to approach people or get in close.

The thing is, if you want to make compelling street photographs you have to overcome your fear of getting close in to the action. The best way to do that is to start asking people to pose for you. It takes a lot of effort and a lot of practice but the results will make you a better photographer. You’ll come to appreciate that the majority of people are open to being photographed and that knowledge will (or should) alleviate your stress of raising your camera to your eye when you’re close to your subjects.

I’m thinking to begin running one day workshops for street photography. Part of my lesson plan would be to practice talking to strangers in the street. I’m confident that in one day I can get people to overcome their fears and learn how to engage people. We’ll see.

2 Responses to How to talk to strangers